“He studied Latin like the violin
Because he liked it.”


Why study Latin? As a Latin teacher, I’m asked this question on a regular basis. And, yes, like Harold in Robert Frost’s “The Death of Hired Man,” I study Latin because I like it! But I realize that I am in the minority.

Yes, Latin is old and essentially no one speaks it; it is dead after all. It is academically challenging, and according to popular thought, there are more relevant subjects on which students can concentrate. Taking care to avoid the pitfall of argumentum ad antiquitatem, I submit that there are many valid reasons to delve into this not-so-dead language.

For starters, read the sentence below:

Borrowing from Frederic Cassidy and Richard Ringler’s edited version of Bright’s Old English Grammar and Reader, the point is clear that when the words of Latin origin are removed, so is the meaning. Three quarters of the structural skeleton of most English sentences – articles, prepositions, and the to be verb – come from Old English; however the flesh and muscle of the sentence body comes from the Latin words (Kopff). When the words from the “dead” language are added, the meaning is clear.

In sum, it should be evident that there is a considerable degree of continuity in the core of the English vocabulary between Old English times and the present.

Of course, if we are discussing relevance, we must not overlook the SAT and college admissions, both of which drive parents and students, and consequently, schools and teachers. Note the chart below compiled by the Educational Testing Service comparing the 2011 and 2012 verbal SAT scores of seniors divided by foreign language taken:

Latin students consistently outperform other students on the College Board exam. The argument can be made that top-tier students are the ones taking Latin, but evidence suggests that Latin benefits in intellectual habits of the mind, higher-level thinking, and deep analysis (VanTassel-Baska). Nancy Mavrogenes examined controlled case studies in multiple cities across the US, which examined the statistical test results of elementary students who took Latin. Findings from the schools in Indianapolis, which reflected those of other studies, found gains in the areas of word knowledge, reading, spelling, and math problem solving. Increases were also reported in math computation, math concepts, science, and social studies.

Continuing that line of thought, according to a study conducted at the University of Tennessee Knoxville, college freshmen who had taken high school Latin were found to have higher college GPA’s than students who had taken other languages or no language at all (Wiley).

I concur with fellow Latin teacher Cheryl Lowe. “For the classical educator, Latin is not an option—it is an essential. It is the sine qua non, that “without which” a classical education is “not” classical." Personally, I love Latin for the same reasons I love traveling. Samuel Johnson – British wit and author of the Dictionary of the English Language – stated that

Is Latin easy? No. Is it the path chosen by the masses? No. But it is a path that defines us as classical educators and students. More importantly, it points us to the origins of civilization, thereby creating sophisticated, literate, and knowledgeable citizens who recognize the beauty and importance of words. 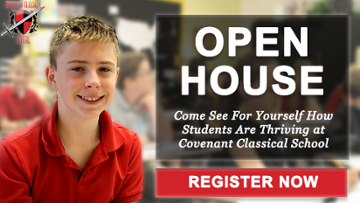 Tina Sneed is a teacher of Latin and English & Dean of Rhetoric School at Covenant Classical. She is a proud alumna of Clemson University, married to Chip, and a mother of three. She is on a quest to find good food, travel to new places, read good books, and translate Latin.